Separated only by quadrillionths of a second: Ultrashort flashes of light combined precisely and quickly

Ultrashort flashes of light lasting less than a quadrillionth of a second are fast growing in technological importance. In laser sources, pairs and groups of light flashes can be created instead of individual flashes. Similar to the chemically bonded atoms in a molecule, they are coupled with each other and their short temporal intervals can possess remarkable stability. Researchers at the Universities of Bayreuth and Constance have now revealed a cause for the stable coupling of ultrashort light flashes and found a way to control their spacing both very precisely and rapidly. They present their research results in the journal "Optica".​ 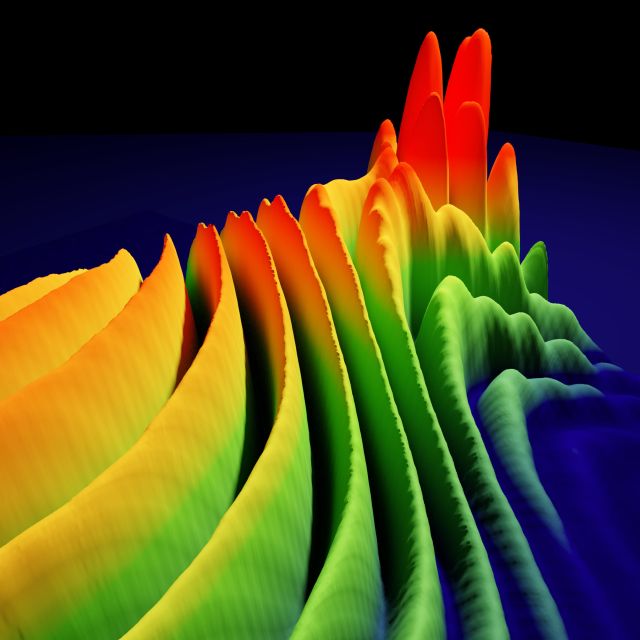 Light flashes shorter than a quadrillionth of a second are also called femtosecond pulses. Today, they are used for researching energy materials, in the 3D manufacturing of components, or as precision scalpels in medicine. In lasers, these flashes are created as solitons, stable packets of light waves. The findings about their coupling that have now been published were obtained on a laser resonator. This contains a ring of glass fibres that allows the solitons to circulate endlessly. In such systems, one often observes coupled femtosecond flashes, so-called soliton molecules. By using high-resolution real-time spectroscopy, the research team succeeded in tracking the dynamics of two coupled flashes in real time during many hundreds of thousands of orbits. Based on this data, the scientists were able to show that it is optical reflections within the laser resonator that couple the individual solitons in time and space. The binding distances could be predicted on the basis of transit time differences within the resonator and could finally be precisely adjusted by shifting optical elements.

In addition, the new study shows how the bond between two flashes can be quickly loosened and a new bond created. It is now possible, for example, to specifically switch back and forth between light flashes that occur in pairs and have different temporal intervals. "Based on our research results, it is now possible to switch soliton molecules at the push of a button. This opens up new perspectives for the technical application of femtosecond pulses, especially in spectroscopy and materials processing," says Luca Nimmesgern B.Sc., first author of the study and physics master's student at the University of Bayreuth.

The findings obtained at the laser resonator can be transferred to a variety of ultrashort pulse laser sources. Consequently, it is possible to generate coupled light flashes in other laser systems and switch their distances without much effort. "Since the first reports of pulse pairs in fibre lasers more than 20 years ago, different explanations have been proposed for the stability of soliton molecules in lasers. The usual models have been contradicted by numerous observations, but are still used today. Our new study now offers a precise explanation compatible with the measured data for the first time. In a way, it provides a piece of the puzzle that makes a multitude of earlier data understandable. Now, complex laser physics can be used specifically to generate soliton sequences at high speed," says Georg Herink, Junior Professor for Ultrafast Dynamics at the University of Bayreuth and coordinator of the research work. Co-author Prof. Dr. Alfred Leitenstorfer from the University of Konstanz, whose research group has been developing fibre lasers as a tool for spectroscopy for years, adds: "Based on our new findings, we can look forward to the realisation of versatile technological applications." At the University of Bayreuth, a DFG research project was recently kicked off with the aim of understanding the interactions between ultrashort solitons in laser sources in detail, and making them usable for future laser applications.