The winners of the regional physics competition at the TAO Pupil Research Centre Upper Franconia at the University of Bayreuth have been determined.

On 23 January 2021, the participants for the German Physics Championship to be held in March of this year were determined at the regional GYPT (German Young Physicist Tournament) competition at the University of Bayreuth. The competition, which was actually scheduled to take place live on campus on 16 January 2021, was summarily moved to the internet due to the coronavirus. 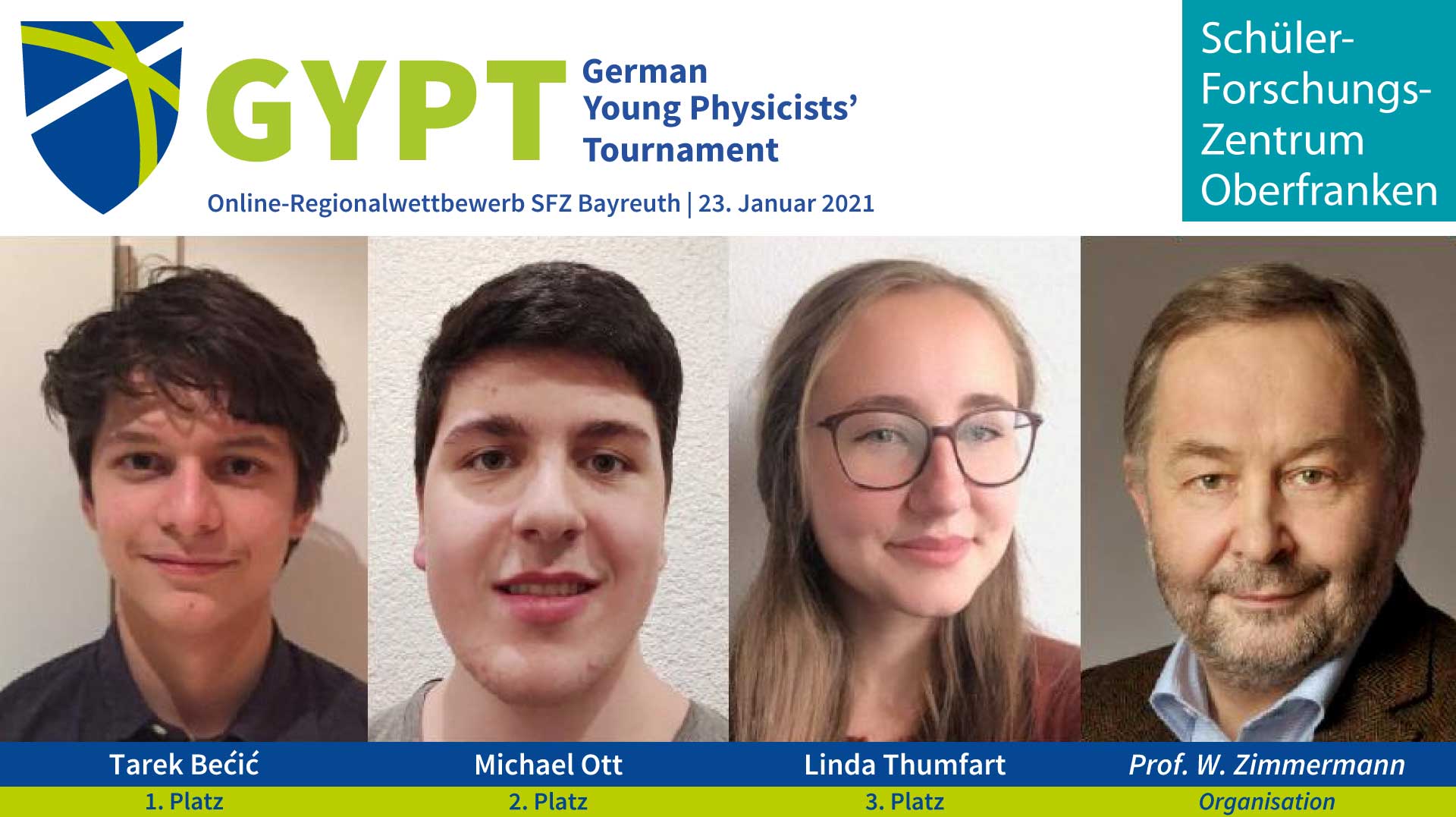 “We didn’t have any experience with holding an internet competition”, reports Prof. Dr. Walter Zimmermann, who supervises the TAO Pupil Research Centre (SFZ) at the University of Bayreuth, “but we weren’t going to cancel the competition under any circumstances! Not even coronavirus should be allowed to thwart these young people’s enthusiasm for research, and confidence on their way to the next levels of competition, if at all possible.”

Members of the support team from the the TAO Pupil Research Centre – Berin Bećić, Sebastian Friedl, Frederik Gareis and Simeon Völkel, formerly enthusiastic and highly successful pupil researchers themselves (German champions 2019, international runners-up 2019, etc.) – transferred the competition to the internet “virtually off the cuff”. “It was a compromise, of course, but fortunately we were able to maintain the character of the event”, says Zimmermann.

The TAO Pupil Research Centre (TAO stands for TechnologieAllianzOberfranken) aims to get young people excited about STEM subjects, and discover and nurture talent for science at an early stage. Pupils learn team spirit here and gain discussion and lecture experience in English. They also learn that research requires patience and perseverance, especially when results are not immediately forthcoming.

The winner, Tarek Bećić, comes from the Frankenwald Gymnasium in Kronach (in 2020, by the way, he was moreover the youngest participant at 14). Using a professional high-speed camera from the TAO Pupil Research Centre, he elucidated an amazing phenomenon that can be observed with off-the-shelf “tic tac” sweets. When hard cylindrical bodies like “tic tacs” fall on a hard floor, they often bounce back higher after their second contact with the floor than after the first impact – unlike round balls! He explained the phenomenon very convincingly with basic laws of physics, which one usually learns in the first three semesters of a physics degree, in an enthusiastic presentation.

The runner-up, Michael Ott, comes from the Augustinus Gymnasium in Weiden. The 17-year-old investigated the question of why a circular ring rotated around a vertical axis, on the inside of which there is a groove, has to be rotated at a minimum speed so that a ball at the lowest point in the groove can “decide” whether to leave the lowest point of the groove to the left or to the right and “take a seat” at a higher position in the groove. This is a fundamental “decision problem” in nature, which the pupil investigated, understood, and explained in his presentation very convincingly.

Third place getter, Linda Thumfart, also comes from the Augustinus-Gymnasium in Weiden. The 17-year-old pupil very impressively explained the mechanism by which a commercially available battery with two button magnets at the ends will start to roll on a sheet of aluminium foil, and why the rolling direction depends on the poles with which the magnets are in contact with the battery.

In addition to these three winners, Emma Ingendorf, Michael Eckl and Sebastian Heiss from Augustinus-Gymnasium in Weiden also qualified for the GYPT national physics championships on 6 and 7 March 2021.

“The six students will be able to prepare themselves for the German Physics Championships most thoroughly with the help of the SFZ Team in Bayreuth. Fingers crossed they’ll make it far in the competition! And maybe a participant from SFZ Bayreuth will make it into the five-member national team for the IYPT world championships, like previously over the last eight years”, Zimmermann hopes.