Oceans, lakes and rivers often contain a large number of microplastic particles on their surface. Impacting raindrops cause many droplets with an almost equally high concentration of microplastics to be thrown up into the air. When they evaporate in the air, the particles enter the atmosphere. Researchers from the University of Bayreuth describe these processes in a new study published in "Microplastics and Nanoplastics". In an initial estimate, which is still fraught with uncertainty in several respects, they come to the conclusion that, worldwide, up to 100 trillion microplastic particles could enter the atmosphere every year as a result of rainfall.

The investigations show that when a raindrop hits a water surface, droplets from a small ring-shaped area around the impact site are thrown into the air. They originate from a depth of a few millimetres below the water surface. The microplastic particles contained in the droplets have almost the same concentration as that in this narrow layer of water. The Bayreuth scientists also calculated their trajectories in the air and their flight duration. This provided a startling insight: The water from raindrops, which is free of microplastics, ends up in the oceans, while water containing plastics from the oceans ends up in the air. When the droplets fly in the air until they evaporate, they release the microplastic particles into the atmosphere. This happens particularly often above the surfaces of oceans, where wind conditions and temperatures favour a comparatively long flight duration and rapid evaporation. Most of the microplastic particles return to the water due to their short flight duration.

A raindrop ejects droplets from the upper water layer. The graph shows the changes that occur three, six and nine milliseconds after impact (from left). Images: Moritz Lehmann.

"It was a huge challenge to determine how many droplets are thrown up by a single impacting raindrop, how large and how fast these droplets are, and how many microplastic particles they might contain. Experiments alone would have provided too little information. That is why we have devised some completely new coding for simulations of these processes and developed a computer model that allows us to answer these questions with high accuracy and in an unprecedented level of detail," says the coordinator of the study, Prof. Dr. Stephan Gekle, Professor for the Simulation & Modelling of Biofluids at the University of Bayreuth. "How realistic our simulations are becomes apparent when we compare them with technically demanding experiments. High-speed recordings of impacting raindrops confirm the calculations based on our model," says first author Moritz Lehmann, a doctoral student of physics at the University of Bayreuth. 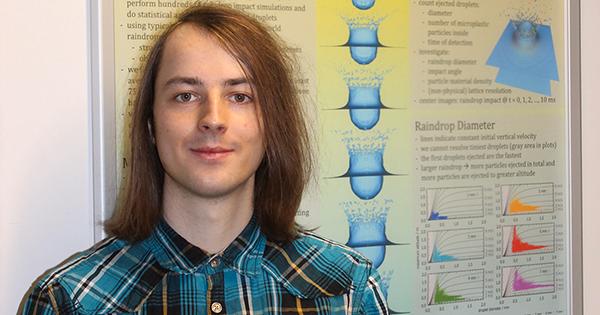 Moritz Lehmann, doctoral student of physics at the University of Bayreuth and first author of the study. Photo: UBT/Chr. Wißler.

In order to find out how many microplastic particles ultimately end up in the atmosphere as a result of these processes, the Bayreuth researchers compiled a large number of empirically available data and included them in their calculations. These data concern, among other things, the concentrations of microplastics at sea surfaces, annual precipitation amounts, the size of the raindrops, which depends on rain intensity, and the temporal distribution of rain intensity. An initial estimate leads to the conclusion that the impact of raindrops on water surfaces worldwide could release up to 100 trillion microplastic particles into the atmosphere per year.

The authors emphasise that this estimate is still subject to numerous uncertainties and inaccuracies. For example, turbulence in the wind, which can influence the impact force of raindrops, has not yet been included in the calculations. In addition, the Earth’s sea surfaces do not have the same high concentration of microplastic particles everywhere - on the contrary, the differences are very large. However, satellite measurements in conjunction with weather models could soon provide more precise information on "hotspots" from which particularly large numbers of microplastic particles are transported from the ocean into the atmosphere.

The study, published in the journal "Microplastics and Nanoplastics", emerged from a research project of the DFG-funded Collaborative Research Centre "Microplastics" at the University of Bayreuth. The Bayreuth research team, led by Prof. Dr Stephan Gekle, collaborated with Prof. Dr Andreas Held, Professor of Environmental Chemistry and Air Pollution Control at TU Berlin.