German Physics Championship: Silver and Bronze for SFZ high school students at the University of Bayreuth

High school students from the TAO High School Students Research Centre (SFZ) at the University of Bayreuth have won the silver medal at the German Young Physicists' Tournament (GYPT). The bronze medal also went to a team from SFZ Bayreuth. The winning team this year came from Hameln in Lower Saxony. Due to the pandemic, the final round of the competition on March 6 and 7, 2021, could only be held as a virtual event. 25 teams from all over Germany took part. Almost half of all team-members were female students. 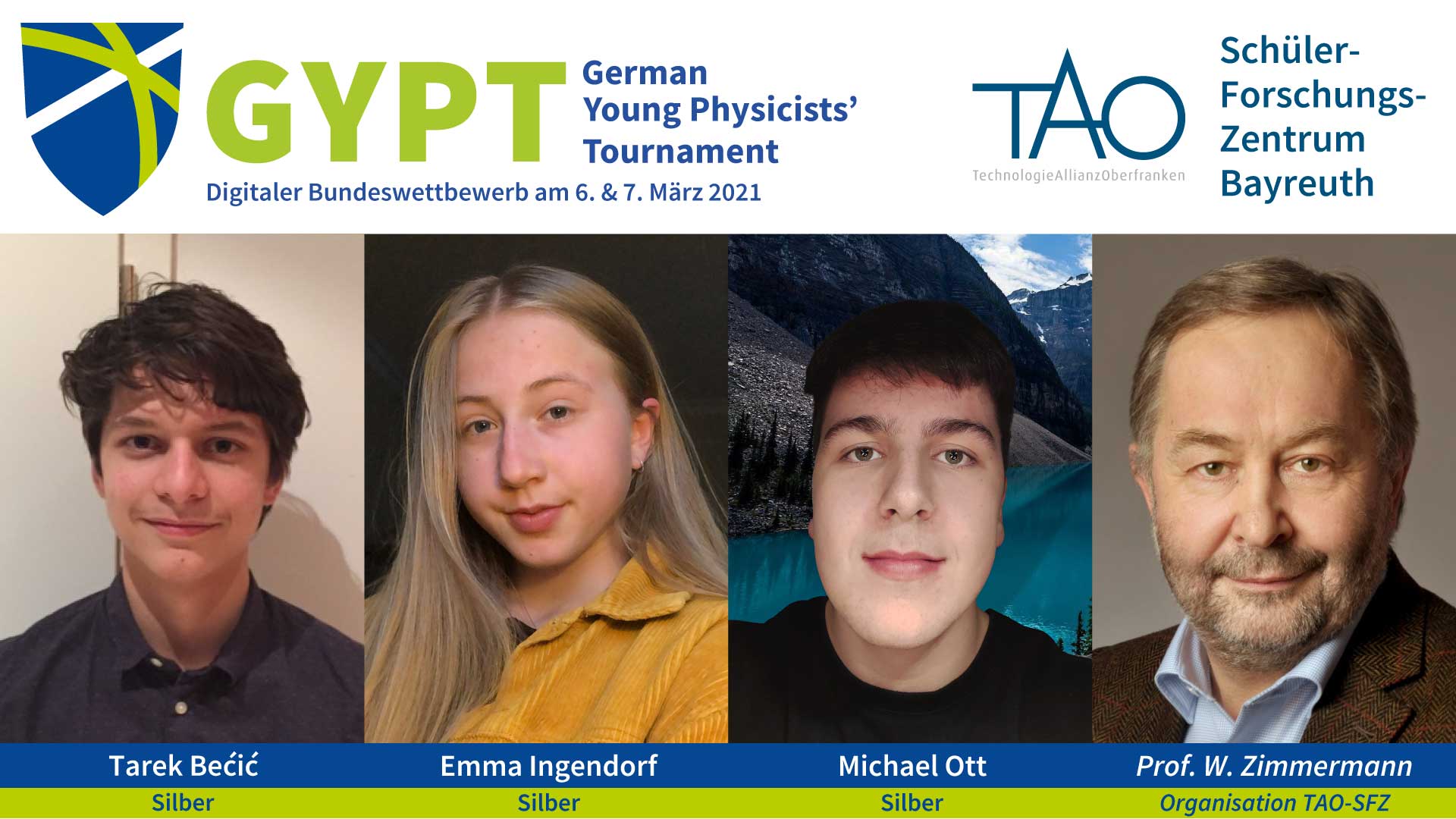 The silver-winning team of the German Physics Championship 2021 was coached by the TAO High School Students Research Centre at the University of Bayreuth: Tarek Becic from Frankenwald Gymnasium, Emma Ingendorf, and Michael Ott from Augustinus Gymnasium in Weiden. Image: UBT.

The team of Tarik Becic from Frankenwald Gymnasium in Kronach and Emma Ingendorf and Michael Ott from Augustinus Gymnasium in Weiden received the silver medal. Meanwhile the team of Michael Eckl, Sebastian Heiss, and Linda Thumfart from Augustinus Gymnasium in Weiden won the bronze medal. As the head of the German Physics Championship, Florian Ostermeier from Ulm, explained at the award ceremony, that the three best teams impressed the judges with similarly outstanding performances, which is why the decision was so very close.

"The German Physics Championship GYPT is similar to an international science conference. The students present their research results in English, which this year was only possible via the Internet. Afterwards, they had to face numerous critical questions – both from competing teams and from the top-class jury, which was also responsible for scoring the teams," reports Prof. Dr. Walter Zimmermann, coordinator of the High School Students Research Centre at the University of Bayreuth which is affiliated to the Technology Alliance of Upper Franconia (TAO).

The next goal of Germany's top high school students is to take part in IYPT, the International Young Physicists' Tournament. This competition will take place this year from July 7 to 14 in Kudasai, Georgia. The five-member national team from Germany will be announced at the end of March following a workshop in Ulm. Eleven students will take part, four of them from SFZ Bayreuth. "It is likely that members from SFZ Bayreuth will be nominated to participate in the Physics World Cup again this year. We are the only high school research centre in Germany that has sent members to the German national team every year since 2014," says Zimmermann, adding, "This year's silver and bronze medal  are further confirmation of our support for young talent and the good atmosphere at SFZ Bayreuth. This success would not have been possible without the great commitment of the 'competition coaches' at SFZ. Berin Becic, Frederik Gareis, Sebastian Friedl, and Simeon Völkel, who themselves enjoyed success in national and international physics competitions, prepared and motivated this year's team members in excellent fashion." 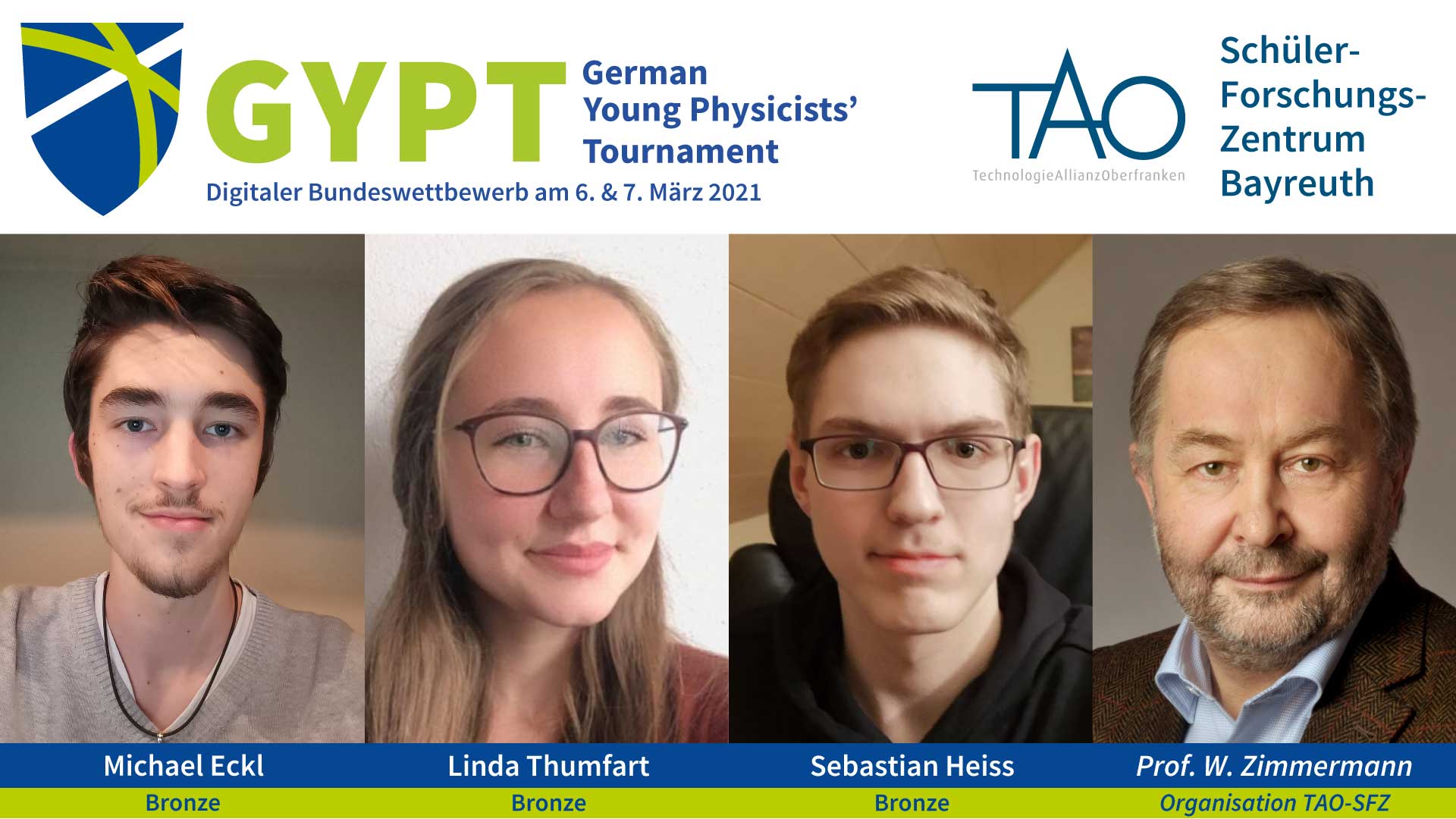 The bronze-winning team of the German Physics Championship 2021 was also prepared for the competition at the TAO High School Students Research Centre at the University of Bayreuth: Michael Eckl, Sebastian Heiss, and Linda Thumfart from Augustinus Gymnasium in Weiden. Image: UBT.

At the opening of this year's competition, the head of the national GYPT competition, Florian Ostermeier, asked what the main motivation for participating was. By far the most important reason turned out to be the students' desire to meet, exchange ideas, and compete with other young people who are equally enthusiastic about research. "This basic attitude is a very good basis for the future generation of researchers, which cannot be encouraged enough. The future success of Bavarian research initiatives depends on this young talent," Zimmermann said. The Bayreuth physicist and SFZ director points to the top-notch talent support provided by the German Physical Society and the Wilhelm and Else Heraeus Foundation, which has international reach. "It would be most welcome if the Free State of Bavaria were to strengthen Bayreuth's top national position among young physicists, for its part, by providing appropriate support during their transition from school to university," Zimmermann suggests .

The topic of the runner-up team from SFZ Bayreuth:
A "decisive problem" from physics

The Bayreuth silver-winning  team dealt with a fundamental phenomenon in nature. It is known in physics as "spontaneous symmetry break" and corresponds to a decision between possibilities. Team spokesman Michael Ott reported on experiments and theoretical considerations for the following experimental setup. An upright ring is rotated around a vertical axis. On its inner side there is a groove with a sphere at its lowest point. The question now is at what speed of rotation of the ring the ball "decides" to leave its resting position to the left or to the right in order to then take its place on a higher position in the channel. "The team achieved publication-worthy results in their investigations with varying rotation speeds, which were presented very convincingly by Michel Ott," Zimmermann says. Tarek Becic and Emma Ingendorf from the Bayreuth silver-winning team took on the task of critically questioning the results presented by the first-placed student team from Hameln, which related to the so-called Wilberforce pendulum..