Leading researcher from Oxford comes to the University of Bayreuth

British physicist Prof. Dr. Laura Herz of the University of Oxford has received the prestigious Friedrich Wilhelm Bessel Research Award of the Alexander von Humboldt Foundation and will regularly be teaching and conducting research at the University of Bayreuth over the next couple of years. The scientist accepted her award, which carries a prize of 45,000 euros, at a celebration in Berlin on 28 June 2018. She will be further advancing interdisciplinary research on inorganic semiconductor materials, molecular energy transports, and highly efficient solar cells together with Prof. Dr. Anna Köhler of the University of Bayreuth's Department of Physics. 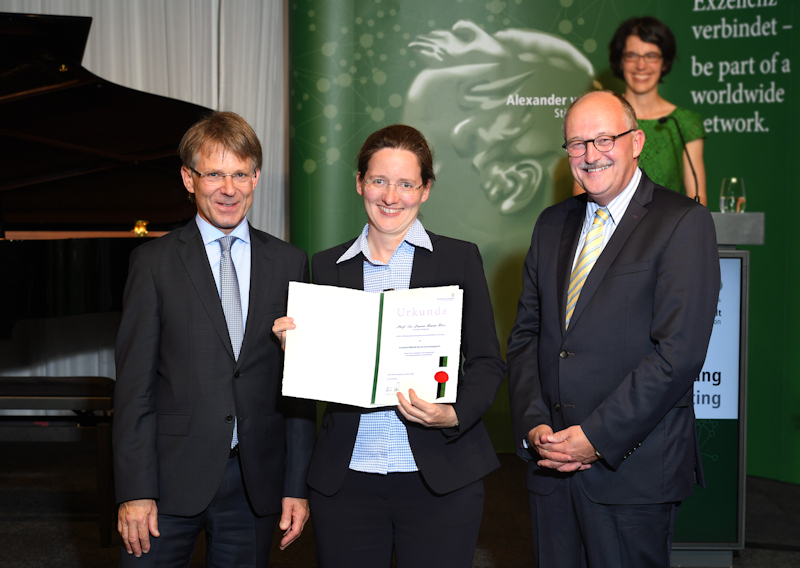 "We are very much looking forward to exchanging ideas and working together with the recent Humboldt award winner. Laura Herz is an outstanding scientist in forward-looking research areas, which are also part of the interdisciplinary research priorities of the natural sciences in Bayreuth. "Together we will work on projects that could provide impetus for the future basis of a sustainable energy supply," explained Prof. Dr. Anna Köhler, who – like Prof. Herz – also carries out intensive research on organic and hybrid semiconductor materials.

The photophysical experiments conducted by the Oxford physicist enabled her to carry out pioneering work in the area of perovskite semiconductors, now recognized to be an extremely promising material for inexpensive and efficient solar cells. At the same time, she has achieved some trailblazing findings in the related research field of "light harvesting". This field takes the way plants or bacteria obtain and store energy as a model for new biomimetic energy technology. Prof. Herz will be further strengthening the interdisciplinary network on Bayreuth's campus in both these fields, in particular in the DFG research training group "Photophysics of Synthetic and Biological Multichromophoric Systems" and the elite programme of study "Macromolecular Science". Contact with the Bavarian Polymer Institute (BPI) and "Solar Technologies Go Hybrid“, a Bavarian research network for solar energy, will be intensified.

"We want to get talented young scholars involved in all these collaborations and give them the chance to discuss their own ideas, projects, and plans with Laura Herz. This may even lead to new approaches to funding female scholars – a topic to which our British colleague has been committed at the University of Oxford for many years," Prof. Köhler said.

The prize-winning physicist will be arriving at the University of Bayreuth on 16 July 2018. Her award was named after German astronomer, mathematician, and physicist Friedrich Wilhelm Bessel (1784-1846). The Alexander von Humboldt Foundation presents it to researchers abroad who have made a name for themselves with their outstanding research output. The namesake of the prize has been teaching and researching at the University of Königsberg for over three decades and was one of the first scientists in Germany to contribute to making research in the natural sciences accessible to a broader public. The award-winner from Oxford is following in this tradition: for example, in her contributions for the BBC she has advocated bolstering public interest in the natural sciences.